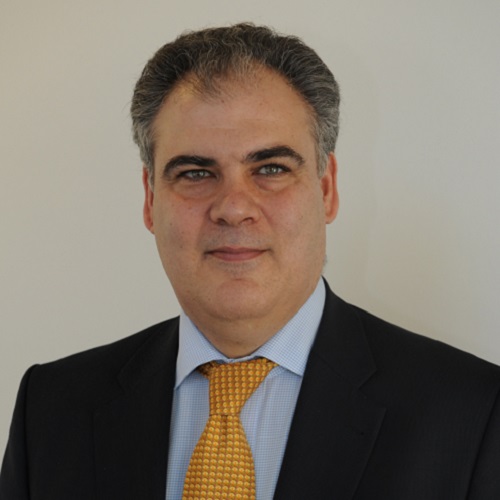 Vasilis Katsipis is based in Dubai and is General Manager, Market Development of A.M. Best for MENA, South & Central Asia.

He has been with A.M. Best for the last twelve years, having joined the company in London as a managing senior financial analyst and growing to the position of general manager, analytics for EMEA. He has written several pieces focusing on insurance and regulation in Europe and the MENA region and has participated in international bodies focused on establishing global standards for insurance.

Prior to joining A.M. Best Vasilis was responsible for alternative distribution channels for GE Insurance Solutions. He has over 20 years of insurance and reinsurance experience, having focused on both the life and non-life sectors. He has held roles in high level operational and strategic positions. For most of his career, he has held international positions with either regional or global responsibilities.

Vasilis holds an MBA from University of Wales and a BSc in economics from Piraeus University.

BEYOND MENA: A REVIEW OF EMERGING MARKETS AND THE IMPACT OF CHINA 1BIR

How do MENA markets figure within China’s 1B1R plans?

MENA markets are up until now a small proportion of the overall investments under the 1B1R. Having said this we are at an interesting time when, on one hand. we have the 1B1R initiative from China and, on the other, the efforts of several MENA Governments to develop their economies away from their dependence on natural resources. The transformation of the economies is likely to necessitate significant infrastructure investments and in areas that Chinese companies have good expertise.
For these reasons, the 1B1R has the potential of transforming the relationship of several of the MENA markets with China while providing expertise and capital investment.

Which lines of business will be most impacted by 1B1R investment?

This will vary from market to market. Broadly speaking this is going to impact construction, engineering and transport. These are in any case lines of business which are already reinsured, some would even say they are fronted by local companies.
Longer term it has the potential of providing some significant capacity for reinsurance to the local markets as reinsurers based in China get acquainted with the local markets and their practices

Is 1B1R doing much to drive regional re/insurance business vs being re/insured in China?

I don’t think we have seen much drive for regional reinsurance business driven by the 1B1R. As mentioned earlier the relative importance of the region to the initiative is the main driver. Growth in the number and value of projects is likely to drive reinsurance demand. One should not forget that the region is already very competitive when it comes to insuring major projects. So, I think, that the main driver as to how this pie will be shared will depend on the appetite of the (re)insurers and the prices that are on offer.